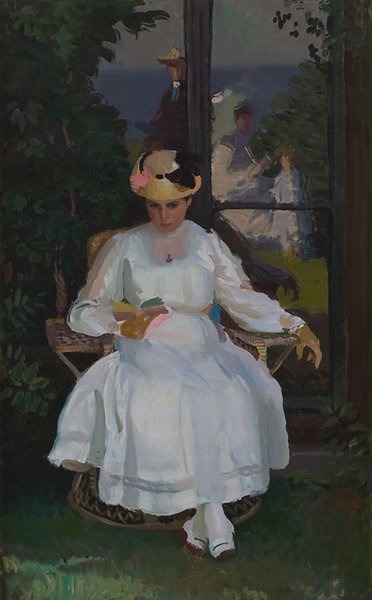 A selection of works by Charles Hopkinson:

Visitors to the Museum often pause to admire Charles Hopkinson’s portrait of his sister-in-law, Harriot Sumner Curtis (1881–1974) on display in the first-floor atrium. The Claude Lorraine Glass, painted in 1909, shows Curtis seated in a wicker chair outside her family’s Manchester home. She wears a white dress and has a book in her hand. Behind her, the artist and other family members are reflected in the glass panes of a French door. Visitors’ comments typically focus on Hopkinson’s artistic skills. The talents of the sitter, however, reveal that she was one of Cape Ann’s great women.

Harriot Sumner Curtis was the 9th of 10 children born to Greely Stevenson Curtis and Harriot Appleton Curtis. Like many women of her generation, particularly those from wealthy families, Harriot was deeply involved in numerous charitable efforts during her lifetime. After graduating from Simmons College’s School of Social Work in 1904, Curtis and her younger sister Margaret organized the Maverick Dispensary in East Boston, a clinic that provided health care to Italian immigrants in the city. By 1920, the facility had a staff of 12 and was servicing over 14,000 people annually. Beginning around the same time, Harriot became involved in The Boston Hampton Committee, raising funds for the Hampton Normal and Agricultural Institute. Located in Hampton, Virginia, the Institute was founded just after the Civil War to educate formerly enslaved men and women.  Among other efforts, Harriot organized fetes on the lawn of her family’s summer home in Manchester to benefit the school. In 1927, she was invited to become dean of women at Hampton Institute, a position she held for five years.

When not fully engage in social work or in raising money for various causes, Harriot Curtis could be found on the golf course. In 1906, she captured the United States Amateur Golf Championship for women, a title she would relinquish to her sister Margaret the following year.

Writing about her family in her 1992 book The Aunts, Isabella Halsted said this of her aunt Harriot Sumner Curtis whom she referred to as Aunt Hat: “Aunt Hat went about her various concerns with a modesty that enabled her to see clearly the gist of a current matter and where she might usefully lend a hand. She was not a talker, but a doer.”

A selection of works by Charles Hopkinson: