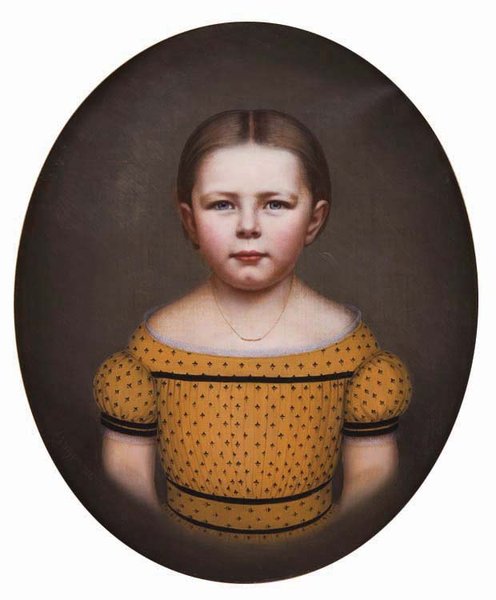 A selection of works by Alfred J. Wiggin:

Nathalie Clough was born in Gloucester in 1863 and was five years old when this portrait was done of her by artist Alfred Wiggin.  Nathalie was the only daughter of Isaac Clough and Georgiana Duley Clough.  She was the first person from Gloucester to graduate from Smith College, doing so in 1885 with majors in mathematics and history.  Nathalie taught for many years at Gloucester High School and served several terms on the city’s school board.

Nathalie was named for her maternal grandfather, Captain Nathaniel Duley (1808-1882). Capt. Duley was a native of the village of Annisquam and gained prominence as a “master mariner” in the stone freighting trade which flourished on the north side of Cape Ann in the middle of the 19th century.  He was also a founder of the Annisquam Mutual Fire Insurance Company (in the 1840s) and an early investor in Mt. Adah Cemetery (in the 1860s).  In the years following the Civil War, Duley and his family moved from Annisquam to Gloucester’s Harbor Village, purchasing property just behind the Universalist Church.  By the 1880s, Nathaniel Duley had assumed the position of Inspector of Salt, an important and well-regarded post in a seaport which prided itself on salt fish.

Late in life, Nathalie Clough lived in what came to be known as the Lorriane Apartments on Middle Street in Gloucester.  Always a firm believer in the merits of education, in her will Nathalie left a substantial bequest to Smith College.

Nathalie Clough never married, and this portrait descended through her cousin, Alice E. Babson to the Cape Ann Museum.

A selection of works by Alfred J. Wiggin: