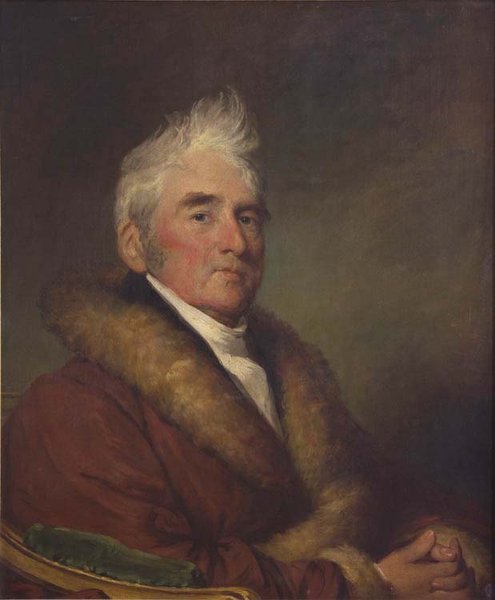 Shown in this half-length portrait, seated in an arm chair upholstered in green velvet, Russell Sturgis was a well known and successful furrier in Boston in the decades immediately following the American Revolution. Furs, like the one accenting Sturgis' robe in this painting, were brought to New England from the Northwest Coast of the United States and were a mainstay of the region's mercantile trade during the first half of the 19th century. Sturgis, along with his brothers-in-law and his sons, was also involved in trade with China.

In Boston, Russell Sturgis was a prominent member of the community. During the 1790s he was a fire warden and also part of a group of men who monitored smallpox outbreaks. He was elected a selectman twice and a member of the state senate once. In 1793, Sturgis was one of 57 Bostonians to provide funds for the construction of the Federal Street Theatre and in 1797 he was appointed trustee of a school house also in Boston.

The Sturgis family was one of the early summer residents in Manchester, Massachusetts, purchasing property just after the Civil War.

This is one of three known paintings Gilbert Stuart did of Russell Sturgis.