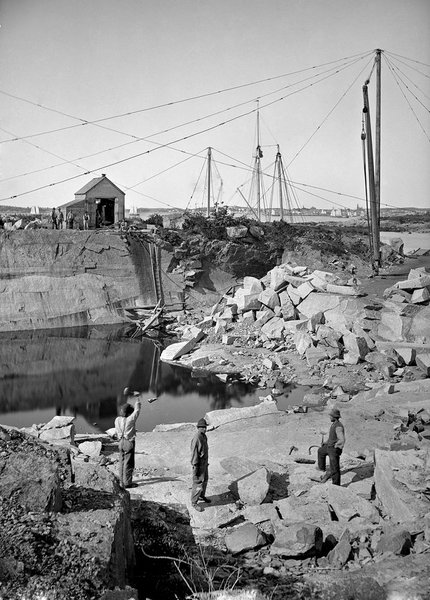 Shown here is the right hand image from a stereocard of a small quarry on Eastern Point, located on the headland between the last two coves before the lighthouse, sometimes called Quarry Point.

Quarrying began here around 1836, when Gardner Greenleaf came to an agreement with the landowner, John P. Cushing, and started cutting the ledge. Granite from this quarry can be found in many buildings, including Fort Warren on George’s Island at the entrance to Boston Harbor, and the foundation of the Boston Custom House. Mr. Cushing eventually sold the land (and most of Eastern Point) to Thomas Niles, who continued to run the quarry until his death in 1872. Work was then taken over by his son William Niles, until production ceased in the late 1870s or early 1880s. In 1887 a syndicate of businessmen calling themselves the Eastern Point Association bought the Niles estate, including the defunct quarry, and began to divide up the land into large house lots. The quarry is now privately owned.

From a collection of 20 glass plate negatives of stereo views taken around 1870, presumably by photographer E. G. Rollins.