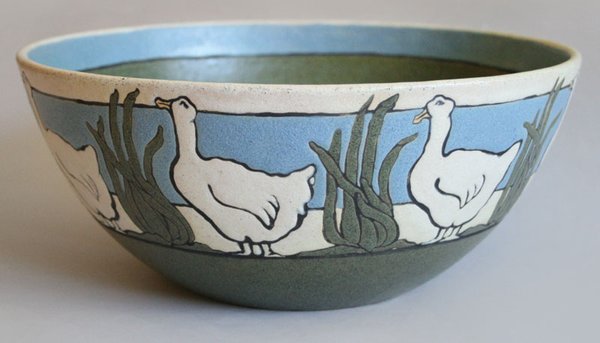 Lili Shapiro who decorated this bowl was a member of the Saturday Evening Girls (S.E.G.), a social club organized in Boston in 1899 to educate young immigrant women and help assimilate them into American culture. In addition to introducing its members to literature, art and history, the club was closely associated with the Paul Revere Pottery which allowed girls to learn the skills of making and decorating ceramics.

One of the most influential and long-term supporters of the S.E.G. was Boston philanthropist Helen Osborne Storrow (1864–1944). A friend of Isabella Stewart Gardner and of Henry Davis Sleeper, in 1907 Storrow had a summer camp built at Wingaersheek Beach in West Gloucester for use by the Saturday Evening Girls. While the camp was in operation for just a short time, it offered young women a respite from life in Boston’s poorer neighborhoods and the opportunity to enjoy summer at the seashore.

The Paul Revere Pottery was in existence until 1942; Lili Shapiro oversaw operations for the final five years of operation, a time during which an estimated 200 young women were employed in the business. Today, works such as this bowl with decorative finishes inspired by the work of artists such as Ipswich’s Arthur Wesley Dow, are emblematic of the Arts and Crafts movement of the early 20th century in America.