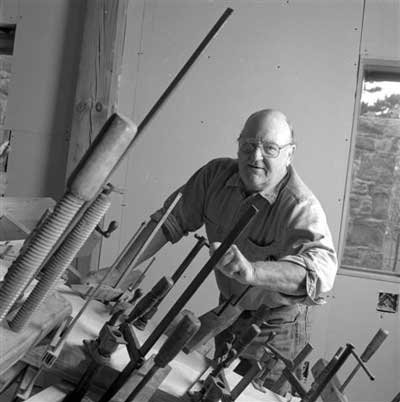 During his 55 year career as a woodworker, McLauchlan has designed and built more than three hundred and fifty pieces of art furniture, sculpture and staircases. Jay McLauchlan: 55 Years of Woodworking and Design highlights the art and creativity behind his craftsmanship.

Born in Cleveland, Ohio, in 1932, Jay McLauchlan grew up in southeastern Massachusetts. In 1951, after working in the rigging-repair department of a mid-West blast furnace plant, McLauchlan was drafted into the Army Infantry. Following basic training he went to Officer Candidate School and served in the 101st Airborne Division. After being discharged in 1954, he attended Oakland Junior College in Oakland, California, followed by the University of California at Berkeley. When Jay graduated from Berkeley it was with a major in Physiological Psychology and a minor in Design and Sculpture.

In 1959, McLauchlan moved from the West Coast to Concord, New Hampshire, and at the urging of David Campbell became involved in the League of New Hampshire Craftsmen. Organized in 1932, the League was dedicated to giving craftsmen an outlet for their work and to educating the public about the beauty and value of both traditional and contemporary crafts. Campbell had been founder of the New Hampshire League, served as president of the American Crafts Council (who operated the well known cooperative America House in New York City) and was one of the leading figures behind the revival of the arts and crafts movement in this country during the postwar period. In Concord, Jay McLauchlan was fortunate to know Alejandro de la Cruz, a true master of traditional joinery. Under de la Cruz’s guidance, Jay honed his skills as his design talents continued to grow. By the early 1960s, Jay’s work was appearing in exhibitions throughout the region including at the Currier Art Gallery, The Society of Arts and Crafts, the Decordova Museum, the Hopkins Arts Center at Dartmouth College and the Museum of Contemporary Crafts in New York. Commissions were also secured with increasing frequency.

In 1962, Jay McLauchlan moved to Gloucester, taking up work space at Beacon Marine Basin. He quickly assumed an active role in the local arts community, becoming a founding member of the Local Colors Gallery and serving on the Gloucester Cultural Council for seven years. In 1995, Jay along with Dick Higgins and Ted Hoague successfully restored the ten Ionic columns outside Gloucester’s historic American Legion Building. The trio also completed important stabilization work on the Fitz Henry Lane House overlooking Gloucester Harbor. In recent years, Jay has been actively involved in Maritime Gloucester and supervised reconstruction of the organization’s marine railways, the oldest continually operated facility of its kind in this country.