The Art of Mary Blood Mellen 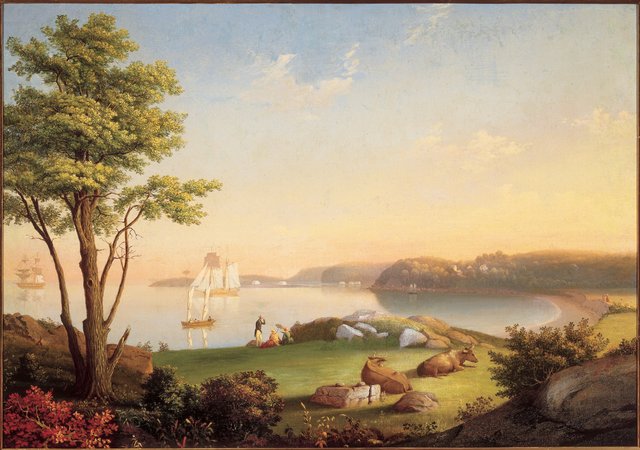 Although often thought of in terms of her mentor, Fitz Henry Lane, Mary Blood Mellen (1819-1886) was a talented and accomplished artist in her own right who commands a place in the history of art on Cape Ann. To better understand Mellen and her artistic skills, the Cape Ann Museum is pleased to offer this special exhibition of her work, on view in the center of the Lane Gallery.

The details regarding Mary Blood Mellen’s life are well documented.  Born in 1819, she grew up in central Massachusetts and in 1840, married Rev. Charles W. Mellen, a Universalist minister.  Fifteen years later, Charles Mellen’s brother, who was also a minister, was called to serve at Gloucester’s First Universalist Church.  It was probably because of that posting that Mary Blood Mellen visited Gloucester and established a friendship with Fitz Henry Lane. Information gleaned from a variety of sources tells us that Mellen quickly became Lane’s student and collaborator; indeed, Lane gave her access to his preliminary drawings and allowed her to assist him on at least one of his canvases.  Stylistic examination of numerous Lane paintings in the Cape Ann Museum’s collection suggests that she may have had a hand in many of them.

As a copyist, Mary Blood Mellen took pride in creating works that mirrored the expertise of Lane.  A contemporary wrote this passage heralding Mellen’s successes:  Mrs. Mellen is so faithful in the copies of her master, that even an expert might take them for originals.  Indeed, an anecdote is related of her, which will exemplify her power in this direction.  She had just completed a copy of one of Mr. Lane’s pictures when he called at her residence to see it.  The copy and the original were brought down from the studio together, and the master, much to the amusement of those present, was unable to tell which was his own, and which was his pupil’s.

While it is possible that Lane feigned his inability to tell his own painting from Mellen’s, scholars today point to subtle and important differences that distinguish each artist’s work.  They include Lane’s eye for detail and his genius at capturing it with crisp and precise lines; his skill at painting vessels so that they appear to be floating in the water, rather than bobbing on top of it is also often called out. Mellen’s work, on the other hand, displays a preference for a more vivid color palette than Lane’s and a tendency towards softer, less meticulous brushwork, a preference that often makes her work feel more painterly.

As additional works by Mellen come to light, it is possible that more will be learn about her artistic career.  It is equally possible, however, that we may never know the details of Lane and Mellen’s relationship and their artistic collaboration.