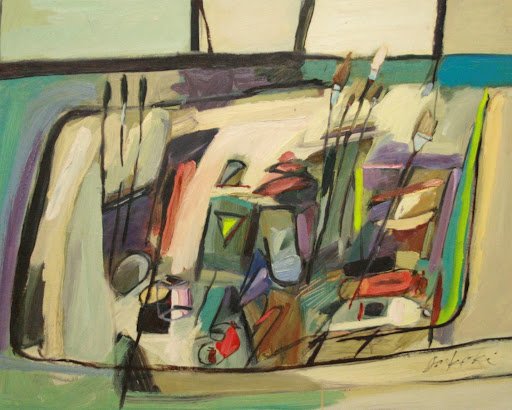 Cape Ann Modern is a special exhibition drawn from CAM’s permanent collection and spotlighting the works of modernists who found inspiration here on Cape Ann during the mid-20th century. Included are works by Sam Feinstein, Elaine Wing and George Aarons. Recent acquisitions on view include works by Thorpe Feidt, Celia Eldridge and Vivian Berman.

Artists working on Cape Ann during the mid-20th century, who experimented with abstract styles and explored fresh subject matter, broke new ground with their work. The “modernists,” as critic Dorothy Adlow called them, moved boldly away from the established forms of art associated with the area, leaving behind the traditional land and seascapes created by Cape Ann School painters and the figurative sculptures modeled by artists who followed in the footsteps of Charles Grafly. Academic painters like Emile Gruppé and Margaret Fitzhugh Browne continued to create and exhibit their work. Increasingly, however, they were joined by a more progressive group of men and women who worked in a range of mediums, exhibited their work widely, and succeeded in engaging new and diverse audiences in the world of art.