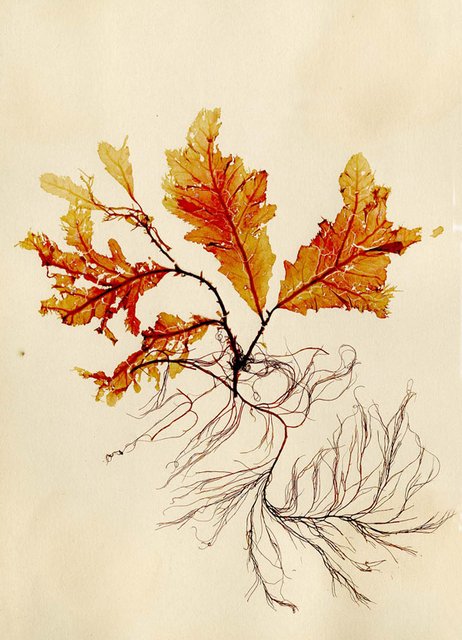 Interest in collecting, drying and pressing algae, seaweed or sea moss, became a very popular pastime in the mid to late 1800s as the Victorians discovered the fascinating world of nature.

There was both a scientific and an artistic side to the collecting. The science was in the identification and correct application of the plant’s Latin name. The artistic was in the arrangement of the dried specimens for display, often in albums. If they were intended as a gift they would be nicely framed and accompanied by a verse of a romantic, moral, or religious nature.

The actual process was not complex. Each specimen was first washed in fresh water to remove all the salts, then floated in a shallow white dish (the contrast between the colored sea moss and the white dish allowing you to see what you were doing). The fragile fronds were then teased out with a needle or fine brush until arranged to your liking. Next a piece of thin board was slipped beneath the specimen and both were lifted carefully out of the water. Further artistic adjustments could be made at this point, while it was still slightly damp. Finally a sheet of high gloss paper was laid on top, followed by a weight, which remained in place until the specimen was completely dry and flat. No adhesive was needed as the natural ‘glues’ in the sea moss made it stick to the card.

Women were among the most avid collectors and on Cape Ann those in the forefront were Harriet Mason, third wife of William Fuller Davis and mother of Catalina Davis; her sister Lydia Ann Mason, wife of John J. Babson, author of History of the Town of Gloucester; Susan Mansfield, who counted Louisa May Alcott and Henry Wadsworth Longfellow among her acquaintances; and Maria Bray, who not only had the finest collection of “Sea Mosses” in New England but became a recognized authority on sea plants.