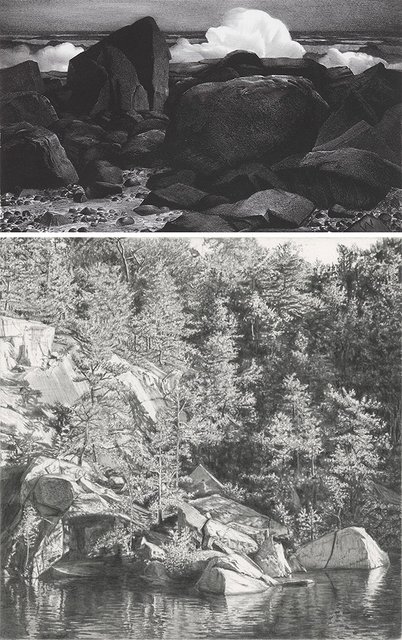 On Sunday, July 11, the Museum will open a special exhibition of lithographs, dry point drawings and watercolors by Stow Wengenroth (1906-1978).  Drawings by contemporary artist Adin Murray, who like Wengenroth, works in black and white and from nature, will also be on display. The exhibition will continue through the fall.

Wengenroth was born in New York and began experimenting with lithography during the 1930s. First introduced to this country in the 1830s, lithography reached the height of its popularity during the mid-19th century.  When Wengenroth took it up, it was no longer the main medium for the print world, however, Wengenroth was keenly aware of the artistic possibilities of lithography and with the early encouragement of fellow artist George Ennis, devoted his life to the art. Without color, viewers are invited to consider the detail of each print and reflect on how the artist created the illusion of color through his careful attention to detail and his masterful use of light and shade.  During his long and successful career, Stow Wengenroth created hundreds of prints, capturing images of New England and Cape Ann during a period of rapid change.

Adin Murray’s work shares much in common with that of Stow Wengenroth particularly his drawings done in graphite and from nature.  Murray was born in Manchester, MA, and holds an MFA from the Savannah College of Art and Design.  The precision reflected in his drawings, many of which are small in scale, is remarkable and invites viewers to look closer and deeper into each composition.  Like Wengenroth’s prints, Murray’s black and white drawings are alive and engaging, filling our imaginations with the colors and nuances of the landscape that surrounds us.