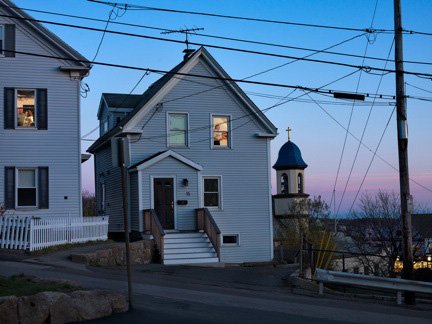 The Cape Ann Museum is pleased to present Hopper Redux, a special exhibition of images by New York based photographer Gail Albert Halaban that offer a fresh look at the Gloucester houses made famous in the paintings of Edward Hopper. The exhibition runs from June 29 to September 29, 2013 and features an opening reception on June 29th from 3:00 p.m. to 5:00 p.m. The reception is free and open to the public.

By photographing the locations that served as Hopper's subjects, paying special attention to reproduce the exact perspectives from which they were painted, Halaban offers a contemporary view of the historically significant properties. The fine detail and crisp colors of her photographs contrast sharply with the informal warmth of Hopper's watercolors.

The distinction between private spaces and public displays is a subject that Halaban has explored in her work for some time now. Hopper Redux continues that narrative by showcasing the Hopper homes and their inhabitants as both confidential and publicly available.

Edward Hopper experienced a creative breakthrough in Gloucester in the summer of 1923. It resulted in both artistic success and the meeting of his future wife, fellow artist Josephine Nivison. The two summered here during the remainder of the 1920's, when Hopper continued to paint select local houses.

Halaban will speak about her work on August 15. Walking tours to a number of the "Hopper houses" are scheduled to run twice monthly during the exhibition.