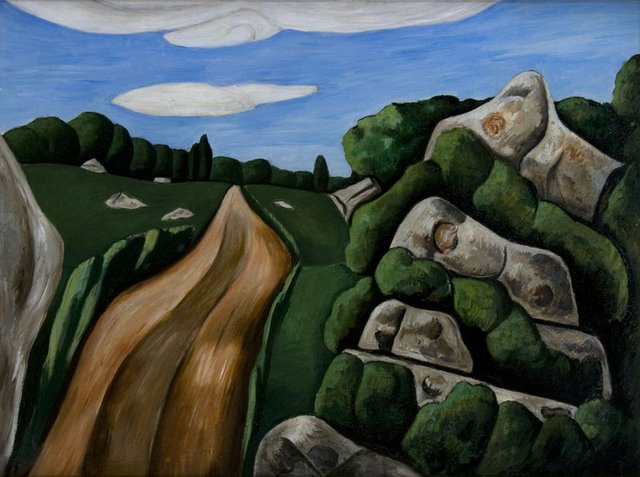 This special exhibition of paintings and drawings of Dogtown Common by American modernist Marsden Hartley included oil paintings and ink drawings from the Cape Ann Museum's own holdings as well as from museum collections across the country, including the Whitney Museum of American Art in New York, the Sheldon Museum of Art in Lincoln, Nebraska, and the High Museum of Art in Atlanta.

Marsden Hartley (1877–1943) visited Cape Ann and Dogtown just a handful of times, between 1920 and 1936, but carried a vision of the area with him throughout the rest of his life. When he arrived for the first time in 1920, Dogtown looked much as it had for the preceding century. Pasture lands and woodlots which had helped support a Colonial-era settlement were still visible. Quietness hung over the place which stood in sharp contrast to Cape Ann's bustling harbor front and beach areas. For Marsden Hartley, Dogtown offered the chance for renewal through contact with the land. He wrote that the place looked "like a cross between Easter Island and Stonehenge—essentially druidic in its appearance."

The Museum has published a color catalog to accompany the exhibtion, with essays by Curator Martha Oaks, James F. O'Gorman and Peter Anastas and reproductions of all the artworks featured in this exhibition. Additionally, a generous selection of related programming was offered, including walking tours into Dogtown, book discussions, children's programs and the Hartley in Dogtown Lecture Series, generously sponsored by Cape Ann Savings Bank.