Footage for this video comes from a 16mm home movie made by Eleanor Parke Custis in the 1930s. Music by local musicians Patricia and Marlon Doucette, recorded 2009, used with permission.

Though St. Peter’s Fiesta is a celebration rooted in prayer and spiritual thanksgiving, one of its most popular traditions is the decidedly rowdy Greasy Pole, an unusual competition held during the last three days of the five day festival. This bite-sized documentary by Gloucester native Emile Doucette provides a glimpse into the competition’s history and a few of its legends.

St. Peter’s Fiesta has been held annually in Gloucester since 1927 and has grown into a five-day celebration honoring St. Peter, the patron saint of the fishermen. It is an occasion that is at once deeply religious and festive.

The tradition of Fiesta was started in Gloucester by Captain Salvatore Favazza (1881-1973), a native of Favoratta, Sicily, who drew on the customs of his homeland in starting the celebration here. At its core Fiesta is a religious occasion marked by nine days of solemn prayer (called novena) within the Italian fishing community, giving thanks to St. Peter for good fortune at sea. Novena is followed by a formal procession in which a carved wooden statue of St. Peter, commissioned by Captain Favazza in 1926, is carried through the Italian neighborhoods of the City on the shoulders of Gloucester fishermen. The statue is then placed in a specially constructed altar, located near the waterfront, becoming the focal point of the rest of the festivities. In the beginning, the altars were simple in design. Over the years, they grew in scale and elaborateness and often were modeled after Sicilian and Italian cathedrals. The procession is repeated at the end of the celebration and the statue of St. Peter is safely returned to the St. Peter’s Club.

Over time, Fiesta has grown to include the annual Blessing of the Fleet, music, speeches, sporting events and a carnival. Among the sporting events, walking of the Greasy Pole is the best known. It entails spirited men, often dressed in costumes, attempting to walk the length of a telephone pole that has been slathered in grease, to grab a flagged tethered to the end. The pole protrudes horizontally out over the water off Pavilion Beach. Another well-known sporting event is the seine boat races—which now include teams of both men and women rowers. All of the festivities that go into Fiesta are paid for by donations from the local community. While much of the funding is collected in advance, donations received from well-wishers along the route of the opening procession are pinned to the long sashes suspended from the statue of St. Peter. 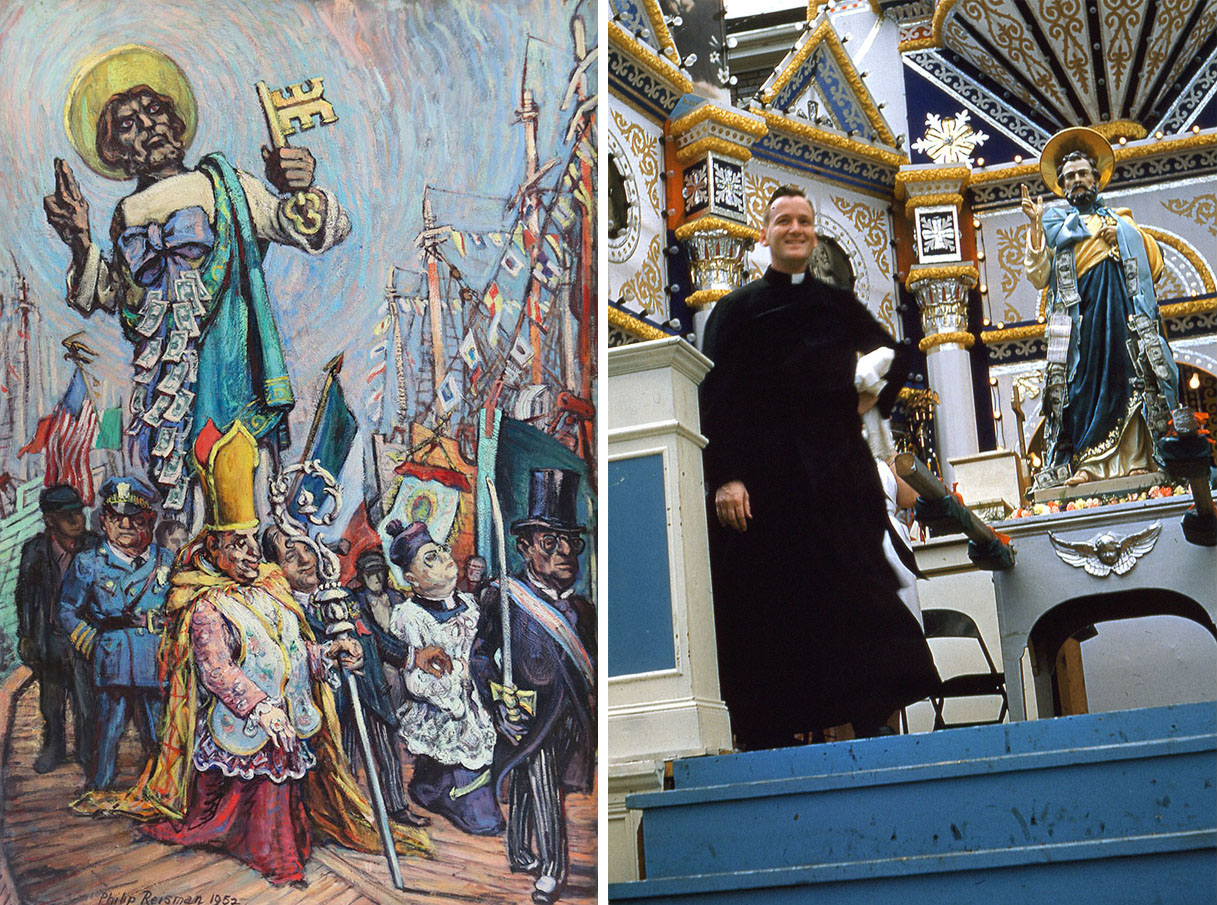 The Blessing of the Fleet has been an important part of Fiesta and even though Gloucester’s fishing fleet has shrunk in numbers over the years, the ceremony still plays an important part in the celebration. During the 1930s and '40s, when the fishing industry was dominated by families of Portuguese descent, Blessing of the Fleet was conducted under the auspices of Our Lady of Good Voyage, the local Portuguese Catholic Church. As Portuguese men began to leave the industry, Sicilian fishermen who worshipped primarily at St. Ann’s Church, took over the ritual, making it a central component of Fiesta.

Salvatore Favazza, who brought the tradition of Fiesta to Gloucester, immigrated to America in the early 1900s, settling first in Detroit, Michigan. Favazza went back to Italy, married in 1905 and returned to this country with his wife, Maria Lucido, and Benjamin, the first of their ten children. The family lived for a while in Boston where Favazza went fishing. By 1910, they had settled in Gloucester where they lived for many years on Commercial Street in the neighborhood known as the Fort. Captain Favazza fished out of Gloucester for over 40 years, skippering 11 vessels, three of which he named St. Peter.

Enlisting the help of children in his neighborhood, Sam Novello and his young helpers decorated close to 70 oars between 1957 and 1972. Each oar, now part of the Museum's collection, bears the name of a Gloucester fishing boat that made a contribution to the annual St. Peter’s Fiesta. The oars were carried in the Fiesta procession by the children of the sea captains. Find out more here.