Park open to the public 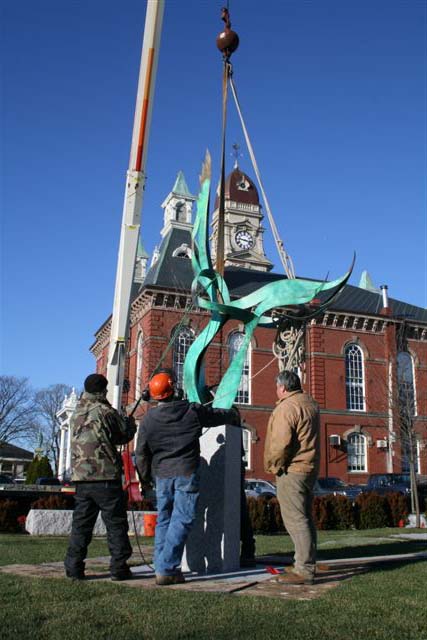 A new landscaped park and sculpture garden has emerged on the site of the former Moose Lodge, adjacent to City Hall, a wonderful amenity for the citizens of Cape Ann and its visitors. The landscape, designed by Clara Batchelor, principal of the firm of CBA Landscape Architects, includes an inviting granite stairway leading up from the corner of Pleasant Street which creates a welcoming and open entrance. Built of New England Deer Island granite and softened by plantings of thyme at the back of the stair treads, the generous stairway invites the public in and relates the park back to the Museum across the street. An accessible walkway is also part of the design. Plane trees, used because of their hardiness along Warren and Pleasant Streets, define and respect the streetscape. A yew hedge, as well as honey locust trees, serve as a buffer to the parking area and form an intimate enclosure for the park. To provide a mixture of color and texture, perennials will be planted in the Spring of 2012 in front of the hedge as well as along Warren Street and on each side of the entrance stairway. The park has two rugged Deer Island granite benches for seating and granite pavers throughout mixed with areas of grass. The old stone wall on Pleasant Street as well as a new retaining wall on Warren Street were rebuilt with Cape Ann granite. Subtle accent lighting will allow the park to have an understated night presence. The construction contractor was Gloucester-based R. B. Strong and the Landscape Contractor was Daniel Provost.

At the center of the park is an engaging bronze sculpture Dance of the Cranes, by Rockport artist, John Raimondi. The inspirational depiction of cranes in flight exudes the optimism and positive spirit which is reflective of the proud and triumphant architecture of the iconic City Hall, which serves as its backdrop. Raimondi, a contemporary American sculptor, is celebrated as a creator of monumental works that are solid in form and fluid in movement. Donated to the Museum by the Charles R. Wood Foundation, the sculpture is part of Raimondi's Environmental and Abstraction Series.

The park and sculpture garden, located in the heart of Gloucester's Civic District, is being built at a time when much of the district is being refurbished. Gloucester's historic City Hall will receive a $2.6 million dollar exterior restoration, starting the first quarter of 2012, from locally raised Community Preservation Act funds. The Central Grammar apartment building has recently undergone an extensive renovation. Finally, the Saunders House has been painted and the exterior of the Sawyer Free Library will have new, handicapped accessible walkways, landscaping as well as an outdoor amphitheater, where stories can be read to children in the warm weather.

The idea of the park and sculpture garden evolved from the Museum's recently completed strategic plan, as one of a number of initiatives to continue the Museum's efforts in community outreach, in this case, building an amenity and placing within it a piece of the Museum's collection, all in the public realm. With this park and sculpture garden in the heart of Gloucester's Civic Center, the Museum intends to establish a more visible connection with the public and to contribute to the creation of a cultural campus comprising the Museum, City Hall, the Saunders House and the Library.