Artist Rob Amory said he had long been looking to find just the right place to display “Reflection,” a modernist stainless steel sculpture he created in 1970.

Now, the Gloucester artist says, he’s found it, and the Cape Ann Museum has welcomed the piece with open arms. 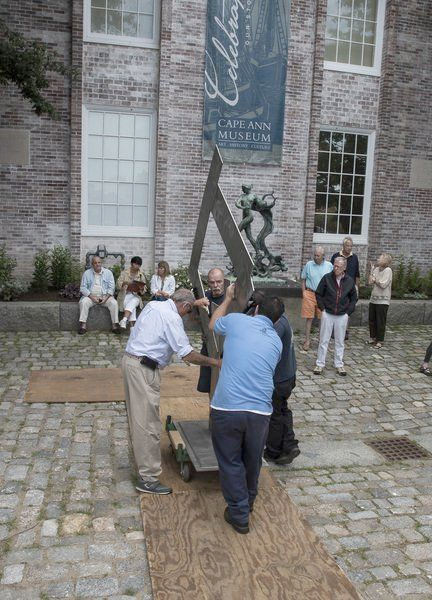 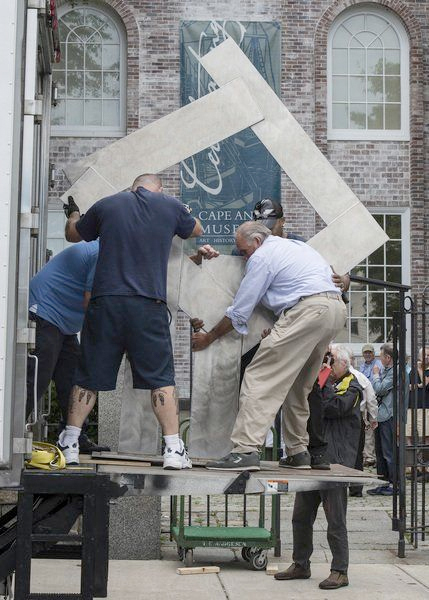 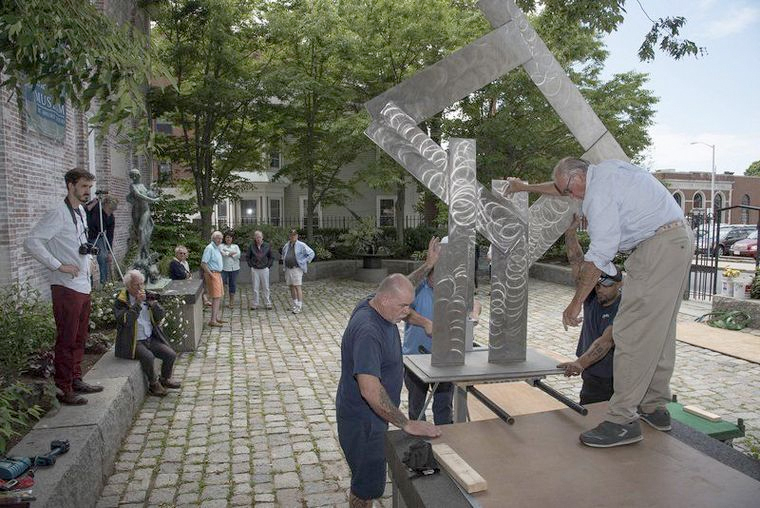 Last week, Amory, Museum Executive Director Ronda Faloon and several others looked on as a moving crew installed “Reflection” in a corner of the museum’s sculpture garden alongside its main building.

The piece, which measures 8 1/2 feet in height and 6 feet in width, fits into a part of the garden where the branches of a tree essentially create an arch above it, further conveying the spirit of the work, Amory said, as crews prepared to set the sculpture in place.

“There is a sense here that this is a place of reflection — a place that is reflective, and meditative,” said Amory, who decided to donate it to the museum after Faloon and museum curator Martha Oaks visited him at his studio in Lanesville last January.

Amory said he, Faloon and Oaks began talking about the possibility of his contributing some of his work to the museum, which had exhibited his portrait photography in the early 2000s, and he soon agreed they had found a match.

“All of this has come together very quickly,” Faloon said of Amory’s gift. “It’s a wonderful addition for the museum, and we’re so happy to be populating the sculpture garden with new works. We’re very happy to have it and display it, and we’re very grateful for it.”

The installation of “Reflection” came just a little more than a week after Amory, who had more recently explored photography before scaling back his creative work due to health considerations in 2012 , took part in the opening of Gloucester High School’s new digital photography studio. The studio is stocked with some $50,000 worth of equipment Amory donated to that program in 2012. The high school facility, called Studio 3015, also includes new digital processing technology to which Amory committed $13,000 toward an overall $20,000 installation project there.

Amory, however, has been best known for his work in sculpture, and especially in public art. His 26-foot-tall piece “Helion,” known informally as “the Lollipop,” graced Boston’s Downtown Crossing for 25 years and now stands on Shawmut Street. The kinetic sculpture is composed of 24 orange discs attached by metal rods to a large ball bearing. When the wind blows on the orange disks, the ball bearing spins, causing the disks to rotate.

“Reflection” is neither as tall, nor is it a work in motion.

“There is a beautiful synergy, I believe, between this place and this piece,” he said the installation of “Reflection” in the Cape Ann Museum garden. “And it’s always a wonderful thing when that happens.”

Staff writer Ray Lamont can be reached at 978-675-2705, or via email at rlamont@gloucestertimes.com.