Rocks and docks: Exhibit gathers some of the best Cape Ann paintings 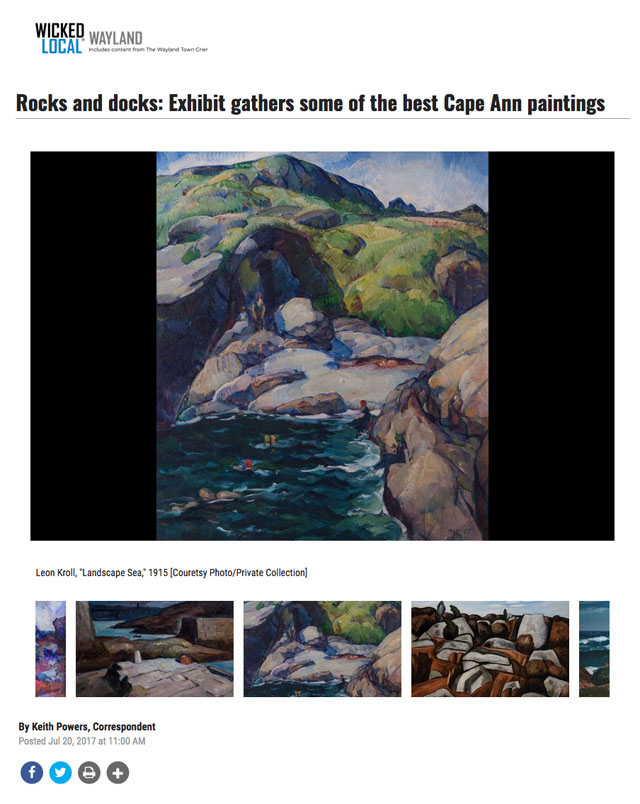 GLOUCESTER - You’ll never see a lot of Cape Ann’s greatest paintings. Unless you go to the Cape Ann Museum this summer.

“Rock Bound: Painting the American Scene on Cape Ann and Along the Shore,” the museum’s major summer show, collects more than four dozen landscapes from some artists well known to Cape Ann - Hartley, Davis, Avery, Hibbard, Hassam - and from some less well remembered, like Emma Fordyce MacRae, Martha Walter, Hugh Breckenridge, Yarnall Abbott and Sally Michel. And it assembles almost all of them from private collectors - hence the singular opportunity to see them right now.

Built loosely on a summer theme, focused on the pre-World War II era, “Rock Bound” looks at Cape Ann from only a century ago. But it looks like a much different place.

A bustling stretch of Gloucester’s East End seems like it was fun (as shown in Max Kuehne’s 1920 oil “Main Street, Gloucester”) back in the day, Marsden Hartley’s Dogtown (in “Dogtown Common”) has been completely transformed from the rock-strewn space he walked through (well of course the rocks are still there) to an overgrown wilderness. It’s still a beautiful sanctuary, but not nearly as exotic. And the structures on Stuart Davis’s “Ten Pound Island” from 1917 are probably entirely fabricated - at least any trace of them has long since vanished.

But this exhibition isn’t about nostalgia. It is for one thing a reminder that Cape Ann has been a vibrant painting community for a long time, and can stand confidently with other far-flung locales like Maine’s Monhegan Island and Provincetown when hotbeds of artistic activity get listed.

The exhibition shows paintings almost exclusively. Two works by Emma Fordyce MacRae reveal her obvious feelings for Seurat, but boldly updated with a kind of distressed treatment of the canvases.

Three large paintings by Lester Stevens, whose work deserves a place in any Cape Ann collection, are highlights: especially the dramatic “Old Iron Forge” - still standing in Rockport, but no longer the dark, fiery noise chamber that Stevens captures.

Unsurprisingly, since the works comes from private collectors, this group show features multiple works by most artists. It’s a good thing to see more than one Sally Michel, or Martha Walter, or William Glackens - painters whose presence has slipped a bit from the public’s eye.

It is also comforting to see the representation of so many female artists in this exhibition - a sign, perhaps, that the arts might have been blind to gender preferences before other aspects of society were.

Any themes that make this exhibition representative of “the American Scene” are just as elusive as what “the American Scene” might be, in broader terms. A reverence for landscape - here, of course, the docks, the rocks, the coast and the weather. A respect for craft, and hard work - also shown here on the docks, in the forge. These might be some of the relevant characteristics of “American.”

It might be safe to say that, while considering art on Cape Ann at the turn of the 20th century, the focus wasn’t on ideas, but on what you could see. And, given what you can see on Cape Ann, that isn’t such a bad thing at all.

“Rock Bound: Painting the American Scene on Cape Ann and Along the Shore,” runs through Oct. 29 at the Cape Ann Museum, 27 Pleasant St., Gloucester. For more information, and related programming, visit www.capeannmuseum.org or call 978-283-0455.