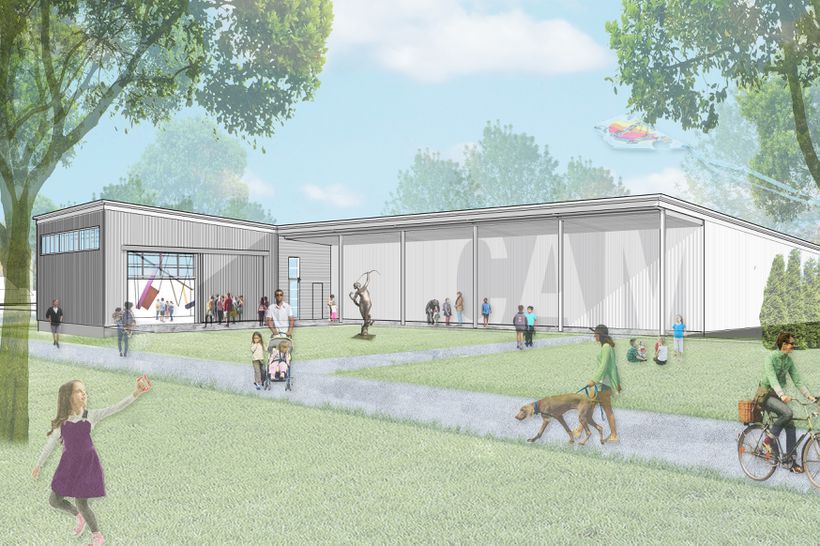 A rendering of the new Collections Center, under construction at the Cape Ann Museum.(designLAB architects)

→ Link to the article in the Boston Globe

With a milestone anniversary approaching, Cape Ann Museum is expanding in Gloucester with the construction of a new facility that will provide it much needed space for storage and exhibits.

The nonprofit art and history museum, which turns 150 in 2023, recently held a raising-the-beam ceremony celebrating progress in construction of its 12,000-square-foot Collections Center. The center will be built on the museum’s White-Ellery campus at Grant Circle next to Route 128.

Set for completion in June 2020, the $4 to $5 million project will provide the museum with added space to store its growing collections, and another venue for exhibits and educational programs, according to Oliver Barker, the museum’s newly hired director.

It will also significantly enhance the 3.7-acre White-Ellery site, which museum officials note is a key entranceway to Gloucester. The future Collections Center will be connected by green space to three historic structures the museum maintains on the site: the 1710 White-Ellery House, a 1740 barn, and the recently acquired 1740 Babson-Alling House.

Gloucester Mayor Sefatia Romeo Theken said she is excited to see the expansion of a museum that celebrates the historical, industrial, and artistic achievements of Cape Ann.

“It’s a win-win for the city of Gloucester and everyone who appreciates our culture and heritage,” she said of the project, which is supported by a $200,000 grant recently awarded by the Massachusetts Cultural Commission.

Barker said the project — and renovations to the museum’s main facilities on Pleasant Street that are set to follow — are timely given the approach of both the museum’s anniversary and of Gloucester’s 400th anniversary, also in 2023.

“This is a very important moment in our history and we want to capitalize on that opportunity,” he said. “So we are looking to grow the collection strategically, and we want to make sure that after 2023 we have the most idyllic settings to showcase our collection and our temporary exhibits.”

Founded in 1873 as the Cape Ann Scientific and Literary Association, the museum today encompasses 44,000 square feet at its Pleasant Street location, which includes the 1804 Elias Davis House — the museum’s initial home starting in the 1920s — and four buildings added since. The museum attracts about 25,000 visitors a year.

The city took the White-Ellery House by eminent domain in 1947 and sold it to the Cape Ann Museum for $1. The house was then located on the Annisquam River in the path of the future extension of Route 128, and a condition of the sale was that it be relocated. The museum moved it across Washington Street to its current location.

The museum bought a field adjoining the White-Ellery site in the 1960s when it was considering moving its main facility there. That idea was ultimately dropped and the field has sat idle since.

In recent years, as the museum has faced a pressing need for more space to preserve and expand its collection, Barker said the current project emerged as the solution.

“At the gateway to Gloucester, the new campus provides the museum with the opportunity to . . . broadcast the Cape Ann Museum’s mission to illuminate the diversity of life on Cape Ann,” Barker said by e-mail, calling the project “an important commitment by the museum to the city of Gloucester and its residents.”