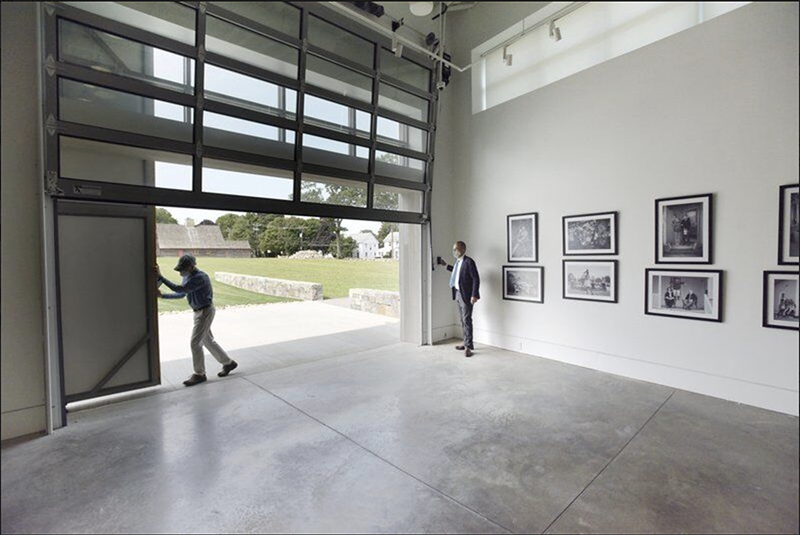 The new and the old have come together at the 3.7-acre Cape Ann Museum Green, which opens Thursday,  Sept. 17.

The property is home to three historic structures and the new12,000-square foot James Center. The effort to provide much needed storage space for the museum collections grew into a more detailed project to bring the community into a vast open outdoor space as well as indoors. A 2,000-square-foot section of the new center will house gallery space. The overall vision also includes the development of an outdoor sculpture garden.

This is Cape Ann Museum's first phase of opening since the pandemic shut the doors at its main campus downtown March 13; the downtown galleries open to the public on Oct. 1. The Green's official opening was postponed until next year because of the pandemic. However, the museum wanted to provide opportunities to visit the new campus under current safety protocols.

This week celebrates the launch of the James Center at 13 Poplar St. in Gloucester, near the intersection of Washington Street and the Route 128 Extension. The center is named after the visionaries behind the project, Janet and William "Wilber" Ellery James of Rockport.

The opening exhibition features "The Porch-Rait Project," which began shortly after the coronavirus pandemic began. Local photographers shot portraits of 245 families outside their homes on Cape Ann in exchange for the families' donations to The Open Door, an agency that supplies food and meals to those in need. The work of photographers Jason Grow, Shawn Henry, Paul Cary Goldberg and Bill Sumner helped raise $30,000. Forty of their portraits were selected for this inaugural show.

"We are inviting the community to experience the vision to celebrate both the history and the future," said Cape Ann Museum Director Oliver Barker. "It builds on what we've been doing in the community."

As museum board member and center namesake William Ellery James walked around the property, his excitement was palpable.

"This is the gateway to Gloucester," said James. "We want to safeguard the cultural heritage, and to honor and preserve the diverse history of Cape Ann."

The new building was intentionally built to one side of the property to allow for ample open space. In fact, the buildings on the property account for only 11% of the area.

The exhibition space in the James Center is called "the new possibilities gallery" as it can be used for the display of contemporary art and as an incubator space for educational programming and community outreach, explained Barker.

Environmental considerations were paramount, and this week the solar panels for the roof arrived. In other work, indigenous plants were placed on the back side of the new building to create a "green screen."

"These buildings are part of the Cape Ann Museum collection. The Green is now home to a 21st century building along with 18th century buildings and they work together to create this new vision," said James. "The challenge for any museum is to be relevant. We have this open space where people can gather and see contemporary art and historic buildings and understand the significance of 18th century homes. It unifies the old and the new."

Best of its kind

James noted that this project could not have happened without the support of so many people, including Charles Esdaile, chair of the museum board.

"We are fortunate to be building on the work of past generations and setting the table for future generations," said James. "We had a vision and the board backed this opportunity to serve the community. This vision is possible because of what others did before us."

The climate-controlled storage ensures proper temperature and humidity for the artworks. It also has a large picture window through which selections from the stored collections be viewed from a matter of feet in the curatorial center.

"It's the best of its kind in the industry," said James. "The quality of the project is in its attention to detail."

Those details include replicating the field stone walls and wooden gates of centuries past as seen in the 1863 landscapes painted of the property by Fitz Henry Lane. And the outside walls are constructed of shadow-seamed steel siding, the design of which creates texture that changes with the light of the day. In another nuance, the windows of the gallery space are north facing to  provide optimal lighting for viewing artwork.

In the meantime, during the pandemic, Barker said the museum continues its preparation for future exhibitions and partnerships with the community.

"We want to be a museum for everyone on Cape Ann," said James. "We want to celebrate the diversity of the people and the history of our community."