Eagle Tribune: Art at the Gateway 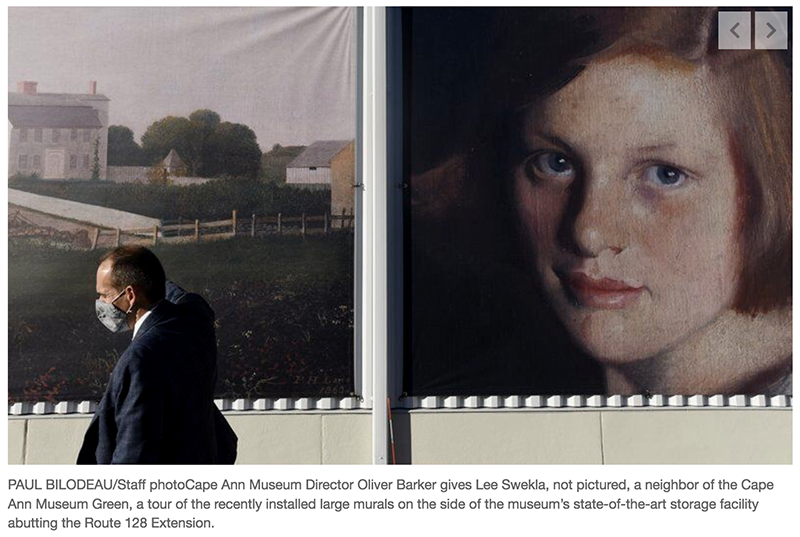 Link to the article here

Gigantic canvas murals are now broadcasting to passers-by Cape Ann’s artistic legacy and that the creation of the Cape Ann Museum Green is complete.

The nearly four-acre corner off Grant Circle that welcomes visitors and residents to the nation’s oldest seaport represents another step forward for the Cape Ann Museum. The property is home to three historic structures and the new 12,000-square-foot Janet & William Ellery James Center, which will provide much needed storage space for the museum collections. The overall vision of the Green includes the development of an outdoor sculpture garden.

The James Center, which includes an exhibition space and a curatorial center for research, was placed toward the edge of the open property alongside the Route 128 extension. The construction at first left some motorists driving by wondering what is the intent of the building.

In this final step of development, museum officials wanted to ensure the public knew this is another effort to celebrate the artistic vision of Cape Ann, from its historical perspective to contemporary works.

Charles Esdaile, chair of the museum board of directors, was among those who watched the banners go up on Thursday.

“These banners are an integral part of the Cape Ann Museum Green project that have long been planned as a way to highlight our collection and increase awareness within our community for our collection, programs and the remarkable cultural achievements that have occurred here on Cape Ann,” he said.

“Our plan was to have an initial selection from the museum’s collection,” said museum Director Oliver Barker. “These new banners reflect the wonderful breadth of the collections, highlighting key works that celebrate the history and remarkable contributions of Cape Ann to the cultural enhancement of our community and the world at large.”

Over time, Barker said the idea is to change the baners at various times to correspond with the themes of future museum programs.

These murals were part of the overall vision, and adds to the comprehensive landscaping at the Greendone this past spring and summer, which included the planting of dozens of indigenous trees, shrubs, and flowers, he said.

William “Wilber” Ellery James, chair of the CAM Green Committee, said these “living murals” are just one way to get people excited about their community, the museum and their unique history.

“These banners are a continuation of the messaging of the banner that went up at the Cape Ann Museum (downtown) to remind people that their courage has been around for 400 years — enduring all kinds of ‘storms’ — and it is all linked to the same history of this museum,” said James. “We want the museum to be of the community and for the community. We want the community to see this as their place.”

“With the museum’s two campuses open and new exhibitions at 27 Pleasant Street, we are looking toward 2021 to continue our focus on this community and together engage and inspire,” said Barker.

James said the Cape Ann Museum is fortunate to have owned the land that has made the CAM Green and the new collections center possible.

“It is our hope that these banners will serve as a beacon of interest and hope for the entire Cape Ann Community,” James said.